Cabergoline: an effective treatment for conception in prolactinoma

Cabergoline: an effective treatment for conception in prolactinoma

Full list of author information is available at the end of the article.

Prolactinoma is an uncommon cause of amenorrhea and subfertility in females. When diagnosed, symptoms resolve with medical treatment in 90% of the cases. Conception and uneventful pregnancy, however, remain a big challenge in these patients. The objective of this study was to determine the therapeutic effectiveness of Cabergoline for conception in female patients with prolactinoma. The duration for restoration of menstruation, spontaneous conception, and outcomes of pregnancy were recorded over a period of 1 year in relation to prolactin level estimation.

This prospective study was carried over a period of 2 years from December, 2019 to December, 2021. A total of 696 female patients of reproductive age, diagnosed with prolactinomas, were included and randomly divided into 2 groups; A (Cabergoline) and B (Bromocriptine), and were given standard doses of both drugs. The duration for restoration of menstruation, spontaneous conception, and outcomes of pregnancy were recorded over a period of 1 year in relation to the serum prolactin level estimations.

Most of the females were 25-30 years of age and most of them (98.2%) presented with amenorrhea. Restoration of menstruation was found to be earlier in group A, i.e., 3.6 months, as compared to group B, i.e., 5.8 months. Spontaneous conception within 6 months was observed in 42.6% of the patients of group A as compared to group B (26.8%). The rate of miscarriage was comparable in both groups. The live birth rate in the Cabergoline and Bromocriptine groups was 84% and 73.4%, respectively (p = 0.02). Mode of delivery was Caesarean section in both groups in all participants. Serum prolactin levels were significantly reduced in the Cabergoline group as compared to the Bromocriptine group (p = 0.035).

Cabergoline is an effective drug for spontaneous conception within 6 months of successful restoration of menstruation in female patients with prolactinomas. Live birth rate is also higher in the Cabergoline group as compared to the Bromocriptine group.

The endocrine glands secrete a hormone called prolactin that has a main function of lactation. The common endocrine syndrome of the hypothalamic-pituitary axis manifests as hyperprolactinemia.1 The high prolactin level results in hypogonadotropic hypogonadism due to suppression of the gonadotropin-releasing hormone. The clinical effects of hyperprolactinemia depend on the age and sex of the patient, as well as the levels of circulating prolactin hormone. Females present mainly with the symptoms of amenorrhea, infertility, galactorrhea, and osteoporosis. About 9%-25% of the cases of secondary amenorrhea and up to 17% cases with polycystic ovary syndrome occur because of associated hyperprolactinemia.2

The pathological causes of hyperprolactinemia include pituitary tumor, stalk effect, chronic illnesses (renal failure, cirrhosis, epileptic fit, etc.), and use of certain drugs. The prolactin secreting pituitary tumor (Prolactinoma) constitutes around 30%-50% of the cases with hyperprolactinemia where prolactin levels higher than 200 micg/l are highly suggestive of prolactinoma. A high prolactin level always warrants imaging of sellar and suprasellar regions of the brain to rule out tumor.3

Prolactinoma can be classified as microadenoma if the size of the tumor is less than 10 mm; macroadenoma if the size is greater than 10 mm; and giant adenoma if the size is more than 3 cm.4 Some women present earlier, but most of them are diagnosed at the stage of microadenoma because of hypogonadal symptoms as compared to males who have nonspecific symptoms like loss of libido. Microprolactinoma, in general, and macroprolactinoma, which is not a threatening vision due to the mass effect, are treated medically.5 Mostly prolactinomas affect premenopausal women and present with infertility, galactorrhea, and/or symptoms of menstrual disturbance. Dopamine agonists are commonly used to treat infertility and galactorrhea. Bromocriptine and Cabergoline are two widely used drugs to control hormone hypersecretion, inducing tumor shrinkage and return of ovulatory cycles.6

The present study was carried out to compare the response of female patients with prolactinomas after giving a trial of standard doses of Cabergoline and Bromocriptine in terms of earlier rate of restoration of menstruation and a subsequent earlier rate of spontaneous conception in relation to the serum prolactin levels.

This prospective study was carried out at Punjab Institute of Neurosciences (PINS), Lahore, and the Gynecology Unit of Lahore General Hospital, Lahore, Pakistan, for 2 years (1st January, 2019 to 31st December, 2021). A predesigned proforma was filled by the researchers by verbally questioning the consenting female patients. The total number of patients initially enrolled in the outpatient department of PINS was 28,200. The total number of patients with prolactinomas was 1,124. Female patients in the reproductive age group were 696. Hence, 696 female patients of reproductive age with amenorrhea, headache, blurred vision, and/or galactorrhea and with raised serum prolactin levels were finally recruited in the study after taking written informed consent.

Females with space-occupying lesions of brain other than prolactin-secreting tumors were excluded from the study. The enrolled female patients were divided into two groups A and B. Group A comprised 348 females who were given Cabergoline (0.5 mg/week), while group B, consisting of an equal number of cases, was given Bromocriptine at a dose of 35 mg/week.

The duration for restoration of menstruation, spontaneous conception, and outcomes of pregnancy were recorded over a period of 1 year in relation to the serum prolactin level estimations at the start of treatment and at the onset of conception.

The data were analyzed by using Statistical Package for the Social Sciences (SPSS) version 26.0 (SPSS for Windows, Chicago, IL). Frequency and percentages were calculated for demographic data. Pearson’s chi-squared test was applied for comparing the outcome variables between the two groups. p-value ≤ 0.05 was considered statistically significant.

Average time since diagnosis of prolactinoma was 26 months. The majority of females (98.2%) experienced amenorrhea. while other manifestations are shown in Figure 1. 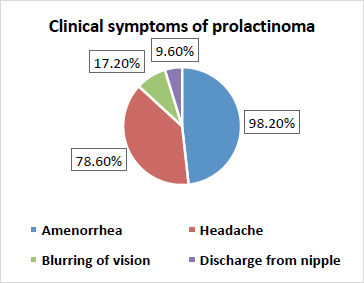 The outcomes of female patients with prolactinomas in terms of onset of menstruation, successful conception, and live births were compared between the two standard drugs, Cabergoline and Bromocriptine. The enrolled patients in the present study were predominantly seen in the 25-30 years age group. This is in accordance with the findings of Tirosh,7 who reported microprolactinomas in the same age group.

The present study reported amenorrhea as the commonest symptom of prolactinoma, followed by headache, blurring of vision, and menstrual irregularity. Similarly, other studies reported amenorrhea as the main complaint, followed by headache, blurred vision, and galactorrhea.8,9 In pregnant women, growth of prolactinoma occurs due to the high levels of estrogen,10 which further leads to galactorrhoea (discharge of milk from breast) and subfertility.11 The high levels of prolactin can be treated by dopamine agonists which reduce the secretion of prolactin and prevents the occurrence of prolactinoma.12 A similar response in terms of serum prolactin levels was seen by both drugs where Cabergoline significantly reduced serum prolactin levels at the time of conception as compared to Bromocriptine (0.035).

The average time of restoration of menstruation for group A (Cabergoline) and group B (Bromocriptine) was 3.6 and 5.8 months, respectively. Cabergoline takes 1-50 months to treat giant prolactinoma and reduce the serum prolactin levels in up to 3 months, but if the patient is treated with low doses, but for long-term, considerable shrinkage followed by successful complete surgical removal of tumor occurs in almost 6 months.13 However, long-term use of Cabergoline may cause heart and lung issues and so regular monitoring is desired by the treating physicians.14 Cabergoline, an ergoline derivative, selectively inhibits prolactin secretion from the anterior pituitary for a long time. After binding to the D2 dopamine receptor, it inhibits adenylyl cyclase that decreases cAMP and mediates apoptosis resulting in autophagic cell death, thus resulting in a decrease in serum prolactin levels.15,16

The spontaneous conception was seen within 6 months in Cabergoline group (42.06%) as compared to the Bromocriptine group (26.40%). Cabergoline is preferable over Bromocriptine because of its tolerability and higher efficacy.15 Prolactinoma management during pregnancy is challenging. Cabergoline reduces the chances of premature delivery and pregnancy loss more effectively than other standard drugs with better live birth rates.17 Similar findings have been reported by the present study in local females who have conceived and gave live births at a higher rate after Cabergoline treatment as compared to Bromocriptine.

Restoration and eugonadal achievement through normalization of hyperprolactinemia and tumor mass control are the ultimate goals for the treatment of prolactinoma, according to the endocrinological approach. The recent data shows successful withdrawal of agents of prolactinoma in various patients through multimodal therapy that involves surgery. The elucidation of mechanisms for the underlying pathogenesis of prolactinomas enables the future development of different molecular therapies that are novel for the treatment of cases with reproductive organ failure.18

Cabergoline effectively restores menstruation and leads to higher chances of spontaneous conception and live birth rate as compared to Bromocriptine.

Limitations of the study

The major limitation of the present study was the lack of detailed analysis of conception and pregnancy outcomes for the enrolled females. In addition, serial estimation of prolactin levels was not available throughout the pregnancy and after the live birth. More prospective trials may be carried out for validation of this study.

The authors would like to acknowledge the staff and doctors of the Pakistan Institute of Neurosciences, Lahore and Gynecology Units of Lahore General Hospital Lahore, Pakistan for their logistic support during the execution of the study.

Ethical approval was obtained from the Institutional Review Board (IRB) of Lahore General Hospital vide letter no. NS-I/162A/PINS dated 29-01-2019.

ZS and RN: Conception of the study, acquisition, and analysis of data, drafting of the manuscript, and important intellectual input.

OA and NC: Acquisition and analysis of data and drafting of the manuscript.

ALL AUTHORS: Approval of the final version of the manuscript to be published.